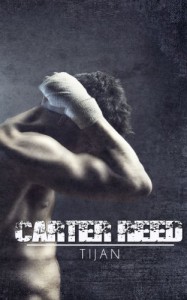 Emma decided to skip the gym and went home early. It was the last easy decision she made because she found her roommate being raped by the boyfriend. She had two choices. Call the cops and be killed by his family’s mafia connections or kill him first and hope to survive. There was no choice to her. She killed the bastard first and went to the one person who could protect her. Carter Reed. He’s a weapon for the rivaling mafia family, but he’s also Emma’s secret. Not only was he best friends with her brother, but she’s the reason he became that weapon in the first place.

My reaction after reading this book?

This book made me sooooo happy, so happy cause it was so good!!! I kept checking how many pages are left while reading cause I didn't want the story to end! And when it did, I'm still happy but now I'm a bit sad and lost.... I want more books like this!!!! The blurb says it as it is. Emma skipped her gym and went home and found her roommate being raped by her boyfriend, so she made a choice, she shot him dead! They can't call the cops cause the boyfriend happens to be in the mafia family! So Emma had no choice but to go seek help from Carter, her brother's best friend. Carter Reed, the sweet boy that she use to know is now a wealthy and powerful man in the mafia family. It started with a bang and I just went on a really amazing roller coaster ride after. It's funny, it's action packed, full of angst, it's romantic and it's definitely HOT!!!

"His smile slipped and his eyes dropped. They lingered on my lips, where I was teasing him. Then he said it, “I love you.” Everything fell away in that moment.
My eyes caught and held his. My hand fell to his chest, and it stayed there, feeling his heart. He tilted my head back and pressed a kiss underneath my chin as he murmured, “I have always loved you.” Another kiss. “I will always love you, Emma. There’s been no other for me.” His hand slid to the back of my neck and his lips moved back to mine. “Now, do you love me?”
I grinned against him, unable to hold it in. “You know I do.”
His hand tightened behind me. “Say it.”
“I love you.” My body melted to his. I became one with him as I said those words. Then I said it again, because I could, “I love you. I always have.”
His lips opened over mine, demanding his entrance. I gave it, because I needed all of him, as much as I could get." This is now one of my most favourite book!!! Ms. Tijan, thank you for this book....