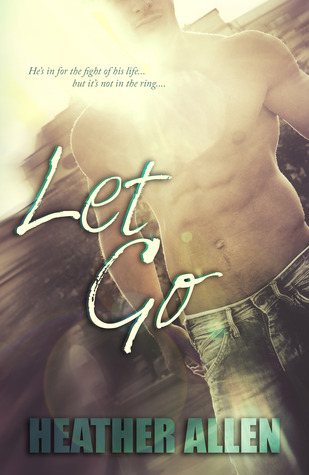 Greylan Pace has been a fighter his entire life. He’s worked hard to get to the top as a mixed martial arts fighter but just when his time in the spotlight has finally come, events out of his control unfold, putting him in a very dark place.
After doing his time paying for his crimes he finds himself back on top. Going to battle in the biggest fight of his life.

But he soon learns that what he’s strived for means nothing in comparison to Mollie Andrews, the green eyed red head on the arm of his old friend. She takes his breath away at first sight. He fights with everything he’s got to keep his focus on his goal, but he knows for the first time ever that he’s going to lose, and it might not be the worst thing.

He’s in for the fight of his life but it’s not in the ring. Mollie Andrews could be the best win he’s ever had, if he can let go of his dream.

Greylan Pace has worked hard to get to the top as an MMA fighter.... but just when he is supposed to finally realize his dream and go pro, he accidentally killed a person while saving his close friend's girlfriend, Mollie, who incidentally he can't seem to stop thinking of since the first time he saw her....

5 Years later, he is out on parole.... he tries to get his life back, and worked hard to get back what he lost.

I love Greylan! Greylan is hot, compassionate, protective and just an amazing person! When he got out after doing his time in prison, he never blamed anyone, he was never angry or bitter, instead he started over.. though he is still dealing with his guilt and nightmares from what happened, which only makes him more endearing.

I get that Greylan would be attracted to Mollie but I don't get why he goes putty when it comes to her, they hardly even talk together, in fact I can count the times they saw each other. There is nothing that I like about Mollie except that she seems to be playing with Greylan! She didn't even see him when he was in jail from saving her!

And what's up with Meyer?!! Meyer is Greylan supposedly close friend who he also hasn't seen after the incident.

I say Greylan deserves better and that he needs to kick ass and fight not just in the ring!

The story, for me, moves in slow pace..... that is until Meyer came back with his girlfriend Mollie and brings back memories.... plus the fact that Greylan is still not over wanting Mollie, God knows why.

Then it got even more interesting when he finally went Vegas! And then secrets are revealed... and then bang, it's a cliffy!!!!

Though I kinda was expecting that at the pace it was going.

That said, can't wait to read what happens next! Written under Greylan's POV.

ARC kindly provided to Slitsread Blog by Author through Into The Night Reviews.... thank you...