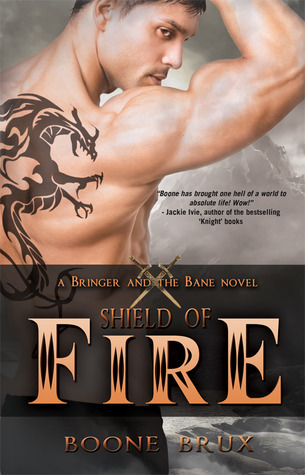 In one night, Ravyn’s life plunges from barely tolerable to deadly. Forced to flee the only home she’s known, she stumbles headlong into the clutches of Icarus, a powerful demon intent on stealing her powers. Unfortunately for him, she has no intention of cooperating. When Rhys realizes the woman he’s rescued from the Bane Demon is no mere human, his obligation as a Bringer dictates he protect and train her in the ways of his people. But he’s unprepared for the intense desire he feels for the fiery Ravyn. To surrender to his need may mean her death. As the Demon King’s desire for ultimate power escalates, fathers are slated against sons, and foes are made allies. The Bane threat upon them, Rhys and Ravyn must quest to unite the last of the Bringers-and explore a passion too powerful to ignore.

Ravyn has never left the abbey of the Sisters from The Order of the Saints and she has always known she was different, but she never knew why. Till that night she went looking for her friend and found her murdered, she gets attacked by a monk, escaped the monastery, almost taken by a demon, Icarus, and rescued by Rhys.

Rhys is a full-blooded Bringer, a protector of human against Bane or demon, upon realizing Ravyn was a Bringer like him, needed to protect her and train her of her power… at the same time fighting the attraction he feels deeply for her.

Meanwhile, the Demon King wants Ravyn for her growing power and he will not stop until he will have her.

Ravyn’s character slowly develop from innocent to bold and fearless… She’d chosen to be with Rhys and help him fight.

Rhys is a warrior, all hot and sexy but with stubborn mindset. He believes to fully do his obligation as a Bringer he could not get involved.

The story starts off in full on action and suspense that got me hooked right away…. The history about the Bringer and the Bane is intriguing… And other characters of the book added humour to the story. You would definitely love Luc. And I’m curious about Jaden too.

The plot is full of mystique which really is quite interesting…

That said, somewhere along the way, the pacing of the story slowed and just drag a bit, though it did pick up after. There is a lot of action that kept me at the edge of my seat…. and though this is a romance novel, the romance part only did it for me near the end… so I find it lacking.

All in all, I think it was good! Written in multi-POV.