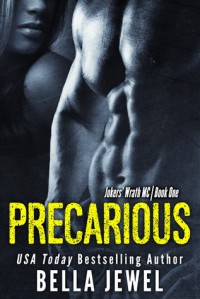 I like that Ash, the lead female protagonist, is a prison guard, she’s passionate about what she does, she’s fierce and she can take down a man double her size. She is not easily scared, she can stand her ground and she doesn’t play coy. Oh and her sex drive?

I have a sex drive wilder than most men; I love it. I am forever wanting to find different ways to do it, often fantasizing about more than one scenario. – Ash

While Beau a.k.a Krypt, is the VP of the Jokers’ Wrath MC. He was apprehended and sent to prison after being accused of killing a man and his family.

This is how Ash met Krypt and her life is about to change… ;)

Krypt knows he was set up by a rival MC lead by Howard… And that Howard paid some prison guards to beat him up to get information. When all the beating got them nowhere, they (the dirty guards) sent him for a transfer to a high security prison, only it was a to be ambushed along the way by Howard’s men… Only problem is, Krypt’s MC beats Howard’s men to it. And Ash, being one of the escorts, is in the middle of it all.

Krypt is described six feet tall, with hard muscles, dark brown hair… with tattoos and lower lip piercing…. and with stark grey eyes. Or in other words, he is “incredibly handsome”. ;) And when it comes to sex, he likes it rough!

“When I fuck, I like to fuck with a raw ferocity most women can’t handle. I don’t make love. I want you up against a wall, my hands tangled in your hair while my cock is driving in and out of you. My hands won’t be gentle; my cock won’t be gentle; and baby,” he growls, “I won’t be fuckin’ gentle.” – Krypt

And this would be perfect since Ash is into that too! In fact, she likes it even more rough!

Sex was… well, It was hot, except for the head butting and elbow shoving… nope, don’t find that hot… but the rest was intense and hot. Then there was that menage a trois… But I’ll get back to you on that one….

Ash can be too much of a smug…. I get that she’s proud that she can take down men bigger than her but she also just loves challenging them for fun? I mean, come on, obviously those big bad-ass scary bikers did not want to hurt her, right?! I don’t know… I just wasn’t buying into her karate kid moves, lol. I thought it just way over the top. Or a part of the story that I can do without.

As for Krypt… well the poor guy, if he never had someone so eager to take him on on his rough choice of sex… I mean, he did just say this :

I thought the club whores loves everything! Maybe he means someone that is not a club whore and one he’s really into. ;)

Krypt and Ash was getting down and rough, just the way they like it…. when Penny comes knocking and Krypt tells Ash to stop cause he don’t want Penny to hear them because he cares about Penny! Really? And for whatever reason he justified this later, it still was just wrong.

I also wanted more suspense and action on my MC novel… But for what was there though…. I thought it was alright.

Let me go back to the menage a trois…. Mais oui, it was hot! ;) But what wasn’t hot was that I don’t believe she never thought for a second that Santana, the girl she considers her friend and whom she owed a favour she can never repay, did not have feelings for Maddox, the president of the MC! And for her to cross that line with Maddox, was, again, a huge no no.

I did like how the murder case and club war rounds up in the end. I am sad for Whiskey but I think he did good. ❤️

I am a fan of Bella Jewel… I love all her MC books… but for reason’s mentioned above, this one just wasn’t it for me.

This also gives you a glimpse of the upcoming Santana and, I’m guessing, Maddox story. I am definitely interested to read about that…. Maddox seemed like his going to be trouble and I’m curious what Santana’s story is about… ;)