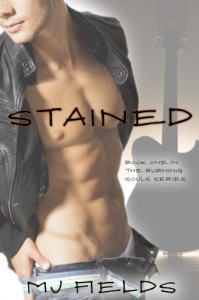 Besides the lots of editing problem that sometimes makes it a tad bit harder for me to understand, there are so many holes in the story regarding Maddox's kidnapping and his rescue that I wondered if I was suppose to read a book before this. How and when did Maddox and Harper meet? Did I miss it? And there's a whole bunch of characters that could get really confusing!

But moving on... since this is more about Maddox dealing with the aftermath of his kidnapping.... seriously if you have been kidnapped and tortured for 16 years, shouldn't he be seeking professional help. I don't see that here. (Well, he did, finally, at the end for like a couple of months?) He also seems to have this need to find those kids that are missing, who are kidnapped like him, but that "need" seems to have just disappeared. He is easily tempered that makes him violent, and deals with his demons through alcohol, his music, forming his own rock band called "Burning Souls", then comes drugs and sex.

He also professed his love towards Harper, a very possessive love. All the while he goes and get's himself off with other women.... which isn't really sex cause he is only getting BJ's and he never kissed them!

“How many people have you kissed?”

“Three,” he looked at her and raised his eyebrows as if to say HA!

“I have kissed one.”

“I know this, what’s the point here Harper?”

“How many people have you touched?”

“Again the answer is dependent on…”

“Fine if we are going to be childish about this. How many breasts have been in your hands? And before you need clarification…”

“Lots. My fingers have been in a lot of wet…”

“Okay Maddox I don’t want to know anything except this: has Jane been one of the people you have been with sexually?”

He looked at her and let out a frustrated breath, “It’s different with her then it is with you.”

Harper swallowed hard, “Is she the other one you have kissed?”

Yep, the kiss is all that matters! Oh and then he also lives with someone, a girl named Jazz, but that's also okay because.....

“Don’t you get it? It should have never happened. I am walking away because I can’t stay, I can’t be the other women. I can’t be…” - Harper

“The other! Jazz took comfort in my body Harper. I care about her. It’s not what I feel with you.” - Maddox

Harper has a really good heart, kind, sweet, innocent, a completely loveable character. She is smart too.... BUT, when it comes to Maddox, she is meek, easy and mindless.

At first I was rooting for Harper and Maddox's love story. But when Maddox became an ass who constantly hurts Harper, I wished her better. There is so much hang-ups in their relationship that is all Maddox. She really deserved better. I actually felt bad for her family who has to witness all these. I felt bad for both their families.

Not that there wasn't anyone else interested with Harper, there is Blake, but his character was never develop enough to mention really.

When the story started they were only 16 and 17 years old... you'll see them grow till they've reach their 20's. It is fast paced, a little bit too fast though.

I can't say I didn't enjoy the storyline cause it made me angry and hurt for Harper, riled me up on a lot of issues! There is a lot of angst and is quite emotional. But there was just way too much that is just wrong (for me) and I couldn't care less if I felt sorry for Maddox. And since this is a three part series, this is just the part of their story.

As for character growth and substance? I'm not so sure yet. Lol.

Do I wanna read the next book? I could say no, but I probably will. I really couldn't put it down once I started so that part is good too!