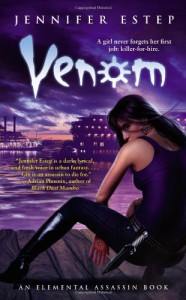 Things I love in this series :

The bad-ass, sexy and smart assassin, Gin.... who controls two elemental, ice and stone.... and has become more bad-ass than ever.

Her team/friends/family : that would be her funny playboy brother or foster brother, Fin; and the dwarf sisters, the healer air elemental Jo-jo, who seems to have a premonition gift as well..... and the very expressive (NOT) Sophia, the cleaner, with her signature monosyllabic replies, actually they sound more like grunts really. Their group has only become tighter.... closer. And I gotta feeling their team is about to grow.

The hot and sexy stone elemental, Owen.... FINALLY, someone more deserving of Gin's attention. I don't wanna say more, just that, I love reading their scenes together, it was sweet and hot and heart melting.

And, I really enjoy the plot and I love the fast paced action that keeps me suspended in suspense.

EXCEPT!!! Now comes the things I really couldn't care less or I wish less of.....

On the first two books of the series, it was alright, I didn't mind it so much..... but now that we're on the third part of the series, I was kinda hoping that it would stop being repetitive on a lot of facts about the characters and background, as if we haven't already read about it enough from first two books. Nope, you get to read about it again and again.... Like, that Gin is the spider assassin, Mab Monroe is a fire elemental who wears her ruby rune around her neck, Fin is her foster brother who loves chicory coffee, Jo-jo grunts for replies and a whole lot more! AND, sorry but I do find some of Gin's liner's an overkill... She's better off with a little less... but that's just my choice. ;)

The thing is, this is a continues series, I would assume that if you must read, read the first book first, right? But with the rate it's going, you will not miss much if you start in the 2nd or 3rd book (can't speak for the rest of the book yet), cause everything that happened before is being told again here, and everyone is introduced like new repeatedly. (Luckily or unfortunately? (haha!) I am one of those who has to or MUST start at from the start, follows it's sequence... or it'll bug me all the time. ;) )

In this series... Roslyn, the vamp that owns and manages Northern Aggression club, needs help from an obsessed stalker! And the worst part, it's Mab Monroe's number one enforcer. And then there's a new detective in town and her name is Bria Coolidge , who just happens to be Gin's long lost sister....

To sum it up..... I really did loved it, all the action, suspense and humour with romance on the side... I am still addicted to the story, so I'm moving on to the 4th book.