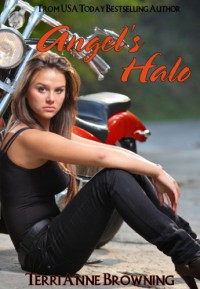 Creswell Springs, a small little town in Trinity Count, California, home of the Angel’s Halo Motorcycle Club where Raven grow up with her father as the biker president and her four brothers, Jet, Hawk, Raider and Colt. All holds a high ranking in the club… On her father’s death, Jet became the club president. So, when it comes to Raven, there is only one rule, “no one touches Raven Hannigan.” And only one man broke that rule… the club’s biker enforcer, Bash. But Bash loves Raven and vice versa so for Bash, it was all worth it if it makes Raven his. Except after his beating, he left and didn’t even say goodbye.

But this book isn’t just about Raven and Bash, it’s also about Hawk and Grace, Jet and Felicity… then there’s Spider and Willa which there isn’t really much going there yet, but it seems it’s heading that way… And it’s written in multi POV.

I liked it… except for the fact that this has 167 pages and doesn’t concentrate on just one story but all of them… so there’s not enough time to connect with all the characters. It’s more like an intro to their story, except for Raven’s and Bash cause there was a bit more of them than the others. Still, again, not enough.... And of course, the ending was left hanging. Though it wasn’t edgy like I would like my biker books to be, still, I couldn’t put it down once I started so that was good! And I would definitely look forward to the next book and hope it would be longer.